What is a Front-End Developer?

The technology industry is home to a plethora of job titles, with one of the most common titles being developer, which in layman’s terms is someone who writes or manages computer code.

You may or may not already know that within the developer job family there are several specialisms, the most common being ‘back-end’ and ‘front-end’. In this post we focus on the role of a Front-End Developer.

Before we dive into the world of front-end development, I thought it would be worthwhile recapping how and why developers’ roles have changed over the years.

The concept of front-end code has been around since the early 1990s when international standards for HTML (Hypertext Markup Language) and CSS (Cascading Style Sheets) were developed and published. Back then, front-end development was the domain of a web designer or web developer, and involved the creation of websites composed of mostly very simple html and image files.

When there was a need for data to be accessed or altered via a website, it was necessary for the website to make calls and checks on the file server to submit or retrieve data, over a very slow dial-up connection, resulting in what we might justifiably call a ‘clunky’ experience by today’s standards.

In contrast, today there are many Single Page Applications (SPA) that allow a rich, fast user experience and provide the ability to perform complex logic on the front-end. The reason this is possible is down to technology improvements such as increased internet bandwidth, improved device technology, changes to internet protocol and potential for local storage in the browser or device.

Developers tend to have one area of focus and most of the time they either work mostly on the back-end of a website, developing complex functions and logic that interact with one or more databases, or they work on the front-end, developing the user interface that a person interacts with.

Most developers tend to have broad knowledge of both the front-end and back-end but also find they will specialise in one or the other and have a deep understanding of that particular type of development.

The role of a Front-End Developer

A Front-End Developer is a role that encompasses aspects of programming and design, and results in the creation of code that the end user of an application interacts with. This includes elements such as navigation, buttons, dropdowns, forms, alerts and ensuring the application adapts to devices like mobile phones, tablets and desktop computers, which all have different sized screens.

Front-End Developers work with all members of a project team but mostly with UX Designers, UX Analysts and Back-End Developers. They take the design concept and are ultimately responsible for implementing it, as well as this they will likely find themselves working with UX designers to come up with innovative ideas to solve any problems at hand.

Front-End Developers should also have a good understanding of working with data sources such as Application Programming Interfaces (API). An API is normally developed by Back-End Developers and supplies data to the front-end, which in turn displays the data to the user in much more user-friendly format.

What are the skills of a Front-End Developer?

The core skills of a Front-End Developer are to have a solid understanding of specific programming languages: HTML, CSS, and JavaScript. As well as these, Front-End Developers need soft skills such as creativity, problem solving, effective communication and teamwork. 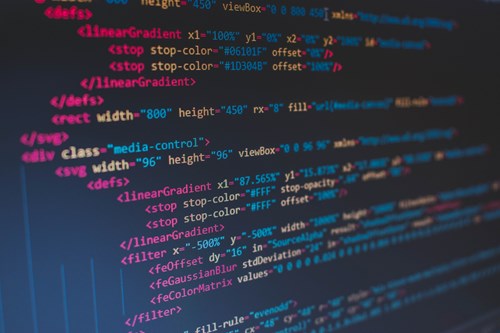 Everything you interact with on a website or application is created using HTML. HTML is the underlying structure of an application’s user interface, covering elements such as buttons and form controls. Think of HTML as the building blocks of the application.

Following on from HTML being the ‘underlying structure’ of an application. CSS (Cascading Style Sheets) is the presentational layer; it determines the formatting and layout of your application such as font, colour and size of content.

JavaScript is used to enhance your application by providing more complex and powerful functionality. For example, when you click a submit button and data is sent to the server without a page reload.

Many Front-End Developer roles also require an understanding of frameworks such as React, Angular or Vue. The purpose of these frameworks is to make the building of Single Page Applications quicker and more manageable. Although complex to begin with, these frameworks can speed up development time, allow you to create feature-rich, highly interactive user interfaces and perform complex and repeatable logic on the front-end.

Angular, for example, was developed by Google for use it in products such as Gmail, Meets and Drive. If you use these products, you will notice they all have an intuitive and responsive interface. Making interfaces accessible to everyone is another key skill for a Front-End developer, but its importance can often be overlooked.

Web Accessibility is the process of ensuring your application is inclusive for all users regardless of disability. The World Wide Web Consortium provides Web Content Accessibility Guidelines (WCAG) that explain how to make web content more accessible to those with disabilities.

Some examples of web accessibility adjustments are ensuring sufficient colour contrast for users with a visual disability and providing keyboard navigation for users who are not able to use a mouse.

GOV.UK has implemented a series of guidelines that their internal Government Digital Services team manage. These guidelines can be found here and they give a great overview of Web Accessibility guidelines.

You can learn more about the latest WCAG 2.2 update here.

Although the above are the core skills, there are a range of other languages, frameworks, and tools that Front-End Developers should have knowledge of. These include SASS/SCSS, TypeScript, Bootstrap and Webpack, as well as state management using Redux/NgRx, package managers such as npm or yarn and version control like Git.

The future of Front-End Development

The future looks bright for Front-End Developers, whose core skills centre around making the right data and information easily available to a person at the right time, allowing them to complete tasks quickly and easily. Increasing reliance on the use of technology and the internet, especially since the COVID pandemic, means that there is currently a huge demand for Front-End Developers.

In recent years, we’ve seen a huge shift from desktop computing to mobile, with an estimated 59% of internet browsing worldwide now being on a mobile device.

Therefore, one likely future for Front-End Development could be continued mobile-first consideration, ensuring that the user experience on all phones is as smooth, intuitive and accessible as possible as their usage continues to increase. Other technologists predict a natural evolution or convergence from screen-based interfaces to voice, digital projection and augmented reality (AR), leading to tech that is more intelligent, more integrated and embedded with our day-to-day activities such as commuting, working, socialising and relaxing.

In any case, the role of Front-End developer is sure to have universal application in the future – what's is certain is our continued reliance on data and technology in all parts of our lives, and of designing solutions to make that reliance as straightforward and efficient as possible.

How do I become a Front-End Developer?

The web is your best resource, you should start learning the basics such as HTML, CSS, and JavaScript. Then once you have a good understanding of these, branch out to more advanced technologies such as SASS, TypeScript, and frameworks like Angular or React.

There are lots of online resources to help with learning these. From YouTube tutorials to online courses, the internet really is your best friend for this.

Practice makes perfect when it comes to becoming a Front-End Developer. So, once you have learned the basics of coding, be sure to get practicing consistently.

There are various routes to kick-starting your career as a Front-End Developer. If you’re a full-time student, you could take on an internship during the school holidays or as part of your school’s work experience programme like Regan did at PDMS.

You may choose to study to become a web developer at university and then pursue a graduate career. However, having a degree is not essential and many companies, including PDMS, offer apprenticeship programmes.

If you are keen on learning to be a Front-End Developer with PDMS then we would love to hear from you - we're committed to helping people get a start in technology careers! Just send your CV to [email protected] with an email explaining why you think you can fit into the team.