Guest blog: Isle of Man Code Club: What is it all about?

Our latest guest blog comes from Adam Drummond who tells us more about Code Club and their recent trip to participate in the CyberCenturion finals, a trip which PDMS was delighted to support from our charity fund.

Who am I and what is Code Club? Hi! I’m Adam Drummond, an Undergraduate Computer Science degree student and a volunteer at the Isle of Man Code Club. If you were to ask me what I do at Code Club, I could go on for days! Two of my most enjoyable roles are my official committee title, the Assets Manager, and the one I’ll be talking about in this post: a Team Leader for the annual cyber security competition, CyberCenturion.

Code Club is an organisation on the Isle of Man aimed at providing a focal point for people of all ages to develop digital skills, share their knowledge and experience, and teach others how to leverage the technology that surrounds us. Essentially, what this means is that we organise classes in both programming and other STEM subjects, host events of interest around technological themes, hold drop-in and pre-booked sessions for anyone to attend, as well as hosting competitions such as CyberCenturion.

CyberCenturion was established by the Air Force Association and is sponsored by Northrop Grumman, is a national cyber education initiative for 12 to 18-year-olds in the UK. The program is designed to excite, educate, and motivate students to pursue further education and careers in STEM and cybersecurity, which helps to build a diverse talent pool to supply the UK’s workforce needs.

At Code Club, taking part in CyberCenturion is something we look forward to every year. Having hosted it at the club since the competition’s second year all the way back in 2015, it really is an integral part of what we do. Each year, we increase in size, to this year having 22 students competing across five teams; we began with just one team of six individuals in CyberCenturion.

Over the seven years of Code Club competing, we have had 39 Manx students take part.

The format is largely the same each year: two qualifying rounds during the Autumn school term, one in January, followed by the National Finals in the Spring. We assemble our teams in late Summer or early Autumn, then they have a month or two to learn and practice together followed by Round 1. For 14 of our members, this was their first time ever competing. The learning curve when taking part in a competition like this is enormous, as it is a topic not often covered in schools, especially when many of these students are just embarking on their journey at secondary school.

It is truly fantastic to see the older students complete a full circle whereby they began knowing near nothing and were trained up by our volunteers, to now where one of our most experienced teams is mentoring and teaching the newer teams as if they were industry professionals.

This year, our teams performed exceptionally well, in that two of our teams, CyberAces and The Toast Mine of Cookies, secured places at the CyberCenturion VIII National Finals. The teams worked extremely hard to get these places, beating over 400 other teams to be one of the top 16 teams across the UK, IOM, and Overseas Territories.

Competing as an experienced team, attending the finals was nothing new to Aaron, Arthur, Luka, and Sid, also known as CyberAces, our senior team. They came 2nd in the finals in 2021 and won the junior finals in 2019. 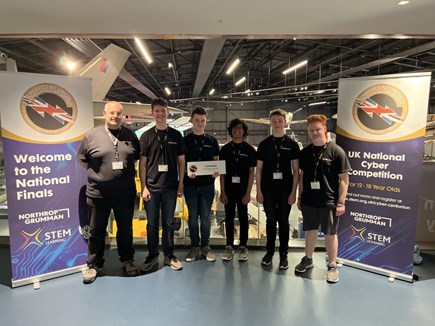 For Alexander, Aristea, Brodie, Cameron and Phelim, the five students from The Toast Mine of Cookies, our junior team, this was their first year competing… ever! Everyone enjoyed the trip to the finals in London. We even organised trips to the Science Museum and National History Museum - for some of our competitors, it was their first time in London, and it was fantastic to see their reaction to the city around them.

Ultimately, the trip came down to one thing: the results. We were extremely proud to announce that CyberAces won the senior competition, with The Toast Mine of Cookies coming second in the junior division.

Want to get involved?

We are all looking forward to competing again in CyberCenturion IX and are always looking for new people to take part, mentor the competitors, or volunteer with us.